I had hoped to post this immediately after the event, but I got really sick the day after. Marathon depletion can be a bitch...even if you've "only" walked.

Let's just get the important stuff out of the way first, that way those of you who aren't interested in the story can get on with your lives...

I hit all of my goals as stated in my previous post. And now I can put The Marathon to rest. I am so totally over the distance. If you were ever hoping to do one with me, sorry...you are SOL. This was my 26.2 swan song.

Now for the story...

If you're new here you might not know that I had a hip replacement about one year ago. Prior to that, I was a runner. Back in 2012 when I didn't know my acetabulum was a flattened English muffin instead of a smooth and lovely round ball, I very nearly entered the Avenue of the Giants Marathon...because it was on my birthday. Instead I entered the Eugene Marathon because #peerpressure is a powerful force (especially if you're a running mommy blogger). Also, I had heard the Avenue course is on a significantly cambered road, which made my hip hurt just thinking about it. My hip ended up hurting too much to train for much of anything that year.

Then last summer I visited the Avenue of the Giants and fell in love. As I had a new hip, no pain, and was hiking with a vengeance, by the time fall rolled around I had decided that I wanted to walk this marathon that wound its way through the incredible redwoods. My training is roughly outlined in the aforementioned previous post.

The Avenue of the Giants is roughly 4 hours from where I live. I decided to drive up the day before to commune with the redwoods prior to the race, pick up my race packet in a relaxed fashion, and get a slushie...

If I'd gone up the morning of, I would have had to wake up around 3 a.m. (which will not ever happen by choice EVER again in this lifetime) and would have passed through Cloverdale before the slushie store opens. No trip to the redwoods is complete without stopping for a slushie.

*side note* if you ever do this race, book your lodging EARLY. There just aren't that many places close to the start/finish and they go FAST...even campsites. I waited until, ohhhh, the week before. Yeah, don't do that. Everything is booked by then...even campsites, and you can't bank on being as lucky as I was and getting something from being twelfth on a waiting list. #nolie

I arrived at the very pleasant Miranda Gardens Resort in the late afternoon, checked in, and then headed to packet pick-up. After a very uneventful picking up of my packet at which I saw Karen but wasn't sure and was too shy to ask, I drove up the first part of the course. I parked and wandered around amongst the trees for a little while. I LOVE THESE TREES. They speak to me.

Then I drove down the second half of the course back to my lodging...

I got really excited.

When I got back to my lodging, I realized that I had forgotten a foam roller or massage stick AND all of my contact lens stuff. Miranda is a town with a population of, like, 32. The nearest "city" is about a half an hour away. It was 7 o'clock. I could handle grinding into any tight muscles with my thumbs, but the thought of walking ALL DAY in my glasses was super unappealing. Luckily, the lady at the front desk called the gas station market for me, and they had ONE lone bottle of contact lens solution. That and two Dixie cups worked great :)


My pre-race fueling consisted of 3 roasted chicken thighs, a cup of mixed berries, some corn chips, and a cup of sunflower seed butter and chocolate chips. This was pretty close to my during race fueling, too. I realize my fueling plan is rather unorthodox, but I have food issues.

The race was set to start at 7:45 the next morning. I went to bed around 10 and fell asleep easily and slept well. The inn has very comfy beds. I awoke at 5:30 feeling rested and refreshed and ready to go. My fanny pack lumbar pack was packed and ready to go. My pre-race prep went off without a hitch. I left on time and was early to the start, probably because I left my kids at home.

It was all quite efficient and easy, getting parked and to the start line. I tried to scope out any other walkers but couldn't. I stayed off to the side and toward the back of the start area, hoping to hook up with some walking buddies and to keep out of the way of the runners. It was quite cool and foggy, but I had a feeling the day would warm up.

Everyone started running. Everyone.

I was rather amused by this. I thought Holy shit! Am I the ONLY WALKER??? No fucking WAY!!!!
I think this picture below was taken at the exact moment I thought that.

I think what happened was that everyone, even those planning to walk, ran for the first mile. I was seriously THE LAST PERSON on the course for the first probably 20 minutes. Interestingly, that's how I trained...alone. So it didn't bother me at all. By the second mile, I started catching people.

At the four-mile mark I asked one of the volunteers if they had any idea when the leaders would be passing by (it's a double out-and-back course). I was told probably any minute, and lo, within a couple of minutes there was Mr. First Place!

The first turnaround was around 6.5 miles. My pace to that point was 12:36/mile (I think). It was pretty cool watching the ENTIRE field...except the 8 people behind me...run past.

I was stoked to take a bunch of pictures. If you're going to take pictures in a marathon, this is the one to do it. I'd been having trouble with my phone holding a charge for oh, about the last year, so I turned it off at about 6 miles in. Things got ultra gorgeous around the 8-mile mark so I pulled it out and snapped this and...yep...my phone up and died. Little spinning wheel. Empty battery icon. PLUG ME IN! icon. So here's the last photo I was able to take...


As I had no more photography diversions, I had to focus entirely on the road ahead. I guess that was good. Even as a walker, I am too competitive. I mean, really, NO ONE CARES. But still I felt compelled to catch people and pass them FOR GOOD.

I crossed the half in something like 2:55. I started to feel like shit around 18. My non-surgical hip was getting cranky. My knee wasn't happy. My heel was burning. I blame the tilted road...and my probably-too-fast-for-me pace. At the 20, a man I'd passed right before the halfway mark caught up to me again. Fuuuuuuuuuck.... was all I could think. But he was cool. He gave me some racewalking stylistic pointers and said if we could keep a 15-minute/mile pace, we'd break 6 hours. This was welcome news because I had not a shred of an idea how long I'd been walking or what my pace actually was...average or current. Remember: my phone had died. (And my Garmin had never connected with any satellites). They don't have any clocks on the course. I was just an oblivious walking machine. He and I walked together for about 2 miles. Then I dusted him.

By 23 I surpassed my personal distance walking record and felt it. Yep. Done. So over the event at that moment. WHEN WILL THIS END? 45 minutes, I told myself. Less than 45 minutes. Power on.

Mile 24...Less than half an hour. You got this. Keep moving the legs...pick up the feet. I've got to say it felt really weird to be thinking of miles in 15-minute increments because it sounds interminable.

Suddenly I was in the last mile. Look at me smiling. I am so fucking glad it's almost over. My legs were fried. And I started thinking What do I do when I'm done? It's not like I can walk it out as if I'd run this damn thing. But stopping moving will probably lead to my legs seizing. GODTHEYHURT. What in the hell do I do? 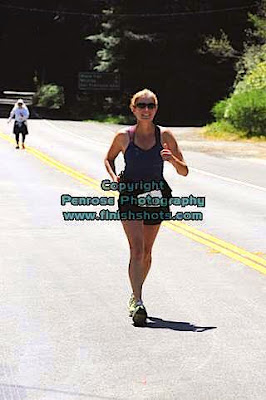 And then it was over.

Some lady sprinted to pass me at the finish line. I started laughing. And when all was said and done, I had a better chip time anyway so whatever. I stumbled around for a few minutes and then spied some massage tables. And massage people giving massages. STILL! I think I was the last person to get a mini-massage...which I extra needed because I then crawled into my car and drove myself four hours home.

And of course on the way home I got another slushie...

I got a medal with a squirrel on it and this cool shirt...

And I am putting the marathon behind me.

And now I'm going to focus on rowing.

I should probably start another blog.

What's your favorite post-race treat?
–I wish I could get a slushie every time.

Ever eat three chicken thighs during a race before?
–yep.

Do you steal race photos to use on your blog?

Have you been losing sleep wondering when I was going to post this race recap?