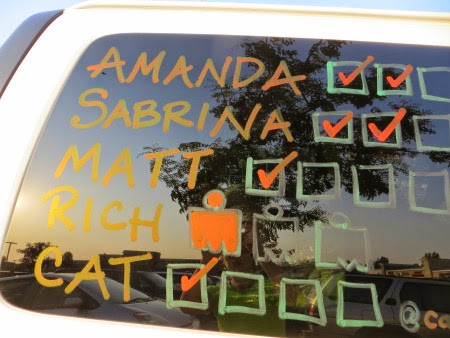 Back to blogging basics: Doing it by the book

After realizing that every single one of my posts last month was a huge #blogfail in terms of this being a healthy-living/running mommy blog, I'm going to make up for it today. After brushing up on the rules of what goes into a proper blog post and creating one chock full of recycled, meaningful content, I'm hoping I've #nailedit. Let me know what you think! ;-)


*encouraging interaction in the comments: +5*
*use of punctuation as smiley winky face: +5*

*nature trail photo with tree: +20*
capturing wildlife would be +10 per animal
though large carnivores and cows are +50 each

*charts and/or graphs: +100 if not obtained from another website*
(only +20 if copy/pasted from somewhere...techsavvy=points, people*


*as GARMIN shots are mandatory, they only score +5*
(omitting a garmin shot would reduce your blog post score by -50.
that's how important they are)


I forgot to photo my #nuun this time and need a macro lens to do justice to the minuscule dates I used for fueling, but my post-workout recovery meal was DELISH...


*optional shit food photo: sliding scale...+10 up to +100*
score varies based on realism...the more shit-like, the higher the score

I need help from YOU in scoring that final element. Please let me know in the comments what score you would give my chile verde :)

ETA: A #bloggymeetup happened...RoseRunner, FasterBunny, Sesa, Jen, and I got together at some hipster place over Labor Day weekend. It was fun. We suck and took no pictures except at the horticultural center of the Hairy Ballsack Tree. Many thanks, Jen, for immortalizing my image fondling the family jewels. Also, we had NO #FROYO :( but we DID have slurpees :) And craft beers.

TOTAL BLOG POST SCORE =  +9356 (give or take, depending on the chile verde score)


Disclaimer: the whole first part of this post was utter bullshit (see warning in lower left corner of page). I haven't run in 20 months...trail or otherwise. I did eat some chile verde the other day, though. But that is a recycled photo. They are all recycled photos. Have a written posts JUST LIKE THIS before? You betcha...just like EVERY OTHER BLOGGER EVER. The second and third parts are not lies. A bloggy meetup did happen and it was fun. I am participating in Ragnar Napa. I did enter the Avenue of the Giants marathon.
Posted by MILF Runner at 4:45 PM 14 comments: