A sausage and a salad.

The erasers had an Eraser Thanksgiving, dining on...erasers. But what a variety of erasers. The kids were jealous. Pizza and a sandwich...


After my kids finished their Thanksgiving Hot Dogs, they kind of went crazy. So we took the youngest out for a run. We love to get her all wound up and then see how far she'll go...


After Thursday's culinary less-than festivities with extended family (which was fun just not particularly foodie), we decided that we really wanted the real Thanksgiving deal and were going to have a turkey and all the other good Thanksgiving-y shit for Saturday dinner. Since I wanted to partake and yet have a billion food intolerances this required extra planning and creativity and research. 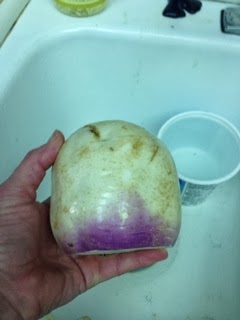 Have you ever seen such a HUGE fucking turnip?
Did you know that small turnips are preferable,
being less "woody"and having better flavor?
Yeah, me neither :(
And the Happiest Turkey on the Block...

The menu was to include tolerance-limitations abiding stuffing, too.

I only have one oven and things got kind of off schedule by A LOT. So it's almost midnight and everything is ready except that really fucking happy turkey.

We're going to eat tomorrow. I'll let you know how it turns out.

What was your favorite part of Thanksgiving?

What was your least favorite part of Thanksgiving?

Did you get to run a Turkey Trot? Did you win?

Would you rather eat a turnip or an eraser?

Have you ever had hot dogs for a celebratory meal other than the Fourth of July?

did you notice the fall decor in the engagement questions? why are you not answering them? WHERE IS EVERYONE?????