It must be global warming.

I call bullshit on summer.

Because I waste way too much time on social media, I got confused. It's not hot where I live. I decided this past weekend that we would go to the beach because I got totally hyped by all the internet buzz about it being hot. Boy, am I dumb.

We were wearing sweatshirts and jeans and were still freezing until the sun finally broke through the fog around 2. We spent a couple of hours talking about going in the water (which is around 60ºF). I finally made a dash for it–

I lasted about 10 minutes, most of which was spent clutching my 11-year old daughter to my body in an attempt to combine body heats (bodies' heat?) for survival.

Then I ate watermelon. And it made me colder.

Meg from Run.Fit.Kin. joined our family for the afternoon. But if you follow me on Instagram or Twitter you already knew all of the above, so this whole post was a colossal (30 second) waste of your time.

It was a 30-second waste of your time anyway.

COMING SOON: I'll have a really overplayed-yet-strangely-desirable item for giveaway, and it will tie in with a mystery/exposé post on a topic no one really gives a shit about with a game attached...because everyone loves #freeshit and goes apeshit for a good overshare with riddles.

Do you see what I did there?


Remember these #PROBloggerTips for your next post. You're welcome :)


I know the whole Lance Armstrong PED thing is an old, gangrenous topic. Add to the list Marion Jones' story. And let's get old skool...Ben Johnson. Nonetheless, I read a DailyMile post by a commoner this week and a blog post by professional triathlete Cat Morrison the other day that freshened the shit up in my mind, and I remembered that publicly rendering my opinion never happened.

First, a disclaimer: I'm not a doctor. I'm not a dealer. I'm not a doper. I've done zero real research into any of this. I'm totally going on hearsay and personal experience. Second, qualifications: while never a professional athlete (my sport was an AMATEUR sport), I did compete on the level that required drug-testing and had the potential to result in national pride. My finishes in several events required that I be subjected to drug-testing protocol and chromosomal gender testing (this person pioneered the need for that sucky test which consisted of gargling with fucking rubbing alcohol and having the inside of your cheek scraped with a sharp-ass edge of a glass microscope slide). I have also had close friends who've failed the drug testing.

Let's start with a couple of questions:
Jesus, the list of questions and conundrums goes on and on.

Here's what I have to say to the cheaters: Y'all are messed up. Stop using the cheating shit. When you get caught, cop to it and shut up. And I say this even to the "small fry" or "accidental" cheaters who unwittingly took the wrong kind of fucking Benadryl (yes, there are different kinds!) and were stripped of medals. Interestingly, it would appear that less than 150 mcg/ml of pseudoephedrine is no longer on the shit-list. I wonder if they're retroactively restoring medals in cases such as this? Probably not.

My friend who got busted and suspended from his sport for two years acknowledged his mistake. That cocaine was a baaaaad idea, he told me. Just kidding! The real story is he was really sick for several days leading up to the Olympic trials in 1992. Bronchitis-y shit. Coughing, couldn't breathe, fever, felt like shit. He went to CVS, forked over his $4.89 and got some Robitussin DM. Ooops! Wrong kind! You can take the MutherFucker Robitussin (Robitussin MF) but stay away from the DeadMuthers (DM), he later counseled me. He finished second in the trials and got tested. It was his swan song as he planned to retire after that Olympics (it would have been his fourth Olympic team). He was old and tired and hadn't won, so the suspension was pretty meaningless. But he was sad to go out on such a sour note.

Here's what I have to say to the people who lose to cheaters who don't get caught or haven't served enough of a penance: Get over it. There will never be enough checkpoints and testing protocols to nail everyone. Clean athletes say they want a level playing field. There is no level playing field. The playing field always has a downhill end, and at that bottom-of-the-hill goal, the poor goaltender has to squint into the fucking blazing, bright sun.

You missed getting the purse because some fuckwad cheater cheater pumpkin eater beat you and didn't get busted? Well, that sucks. BUT let it go. Ready yourself for the next go-round.

My aforementioned friend who got busted gave me this sage advice when I was complaining once about how unfair it all was. I was being treated like shit by our club coaches and the national team coaches for who knows what fucking reason...it was all bullshit and political.

His advice: You just make yourself the best you can be. That's all you can do. Work to make yourself indispensable, un-ignorable, unstoppable. That's all you can do. It doesn't matter what anyone else does. You have to let all that go. Your actions and your integrity speak volumes. Let that be your platform and your legacy then, no matter what color your medal, you win the game. That "game" is Life.

I do think drug-testing and clean sports are important. My point here is that being outraged does nothing but wastes your energy that is better spent focusing on inner peace and the next prize.


I love it when people share the sights they encounter when they run or bike or hike. Sometimes it's lovely, harmonious and natural vistas – trees, creeks, grassy hills and wildflowers. Sometimes it's an interesting, urban visual cacophony of traffic and neon lights and advertisements. It is #soinspiring to be transported to the places these people have experienced.

I didn't want my readers to feel left out of MY experience.

To that end, here's what I saw this past week...and what went on in my mind when I saw it...

It's called "Stream of Consciousness."

And another 30 minutes of z2 on the elliptical in the books.

I'm not asking you any questions because you never answer them. It's hard to build a relationship when there's no communication.

I think maybe we should consider counseling.

I don't think I've ever blogged about a workout here.

Looking at the time line...


So yeah, never blogged about working out.

Taking it a step further...not including this week, I've probably only worked out three times since January (and not at all since February).

WHAT KIND OF FUCKING FITNESS BLOGGER AM I????that's a legit question and there will be a quiz later.

One thing I have going for me is that I've read a lot of blogs so I know what sort of equipment is mandatory for a workout and how to properly document a workout.

What I needed to include... 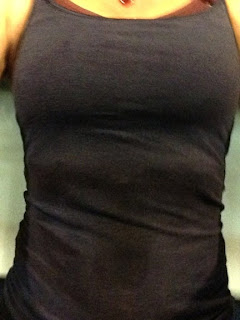 documented some sweaty part of my body
sweaty + gut = #SWUT

As you can see, when I went to the gym for my first-in-six-months workouts this week I was prepared. I knew you all would be scrutinizing my gear and have to know the intimate details of my training.

Easing back into shit because I don't want to be an over-zealous statistic like most bloggers who are injured, I started this week with 30 easy z2 minutes on Monday, Wednesday, and Friday. Hanging out in the gym on a machine wasn't so bad, but my heart rate was acting like I was totally fucked up on cocaine. Which I wasn't. And... my iPod completely had NO charge for my first workout. I threw a tantrum almost left without doing anything but I had scored a parking spot RIGHT IN FRONT of the gym so I knew it was #MEANTTOBE so I did the #rockstar thing and worked out tunelessly on the elliptical. You can follow my #inspirational progress and see more details of my workouts on DailyMile.

Now for the quiz:

Am I achieving my goals? 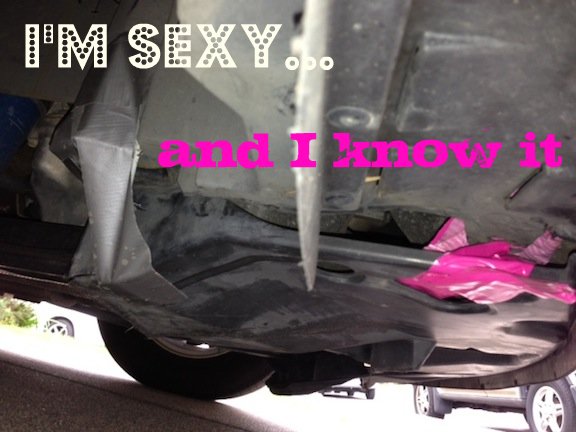 I fixed my car with duct tape.
It looked pretty but it didn't hold past two weeks. 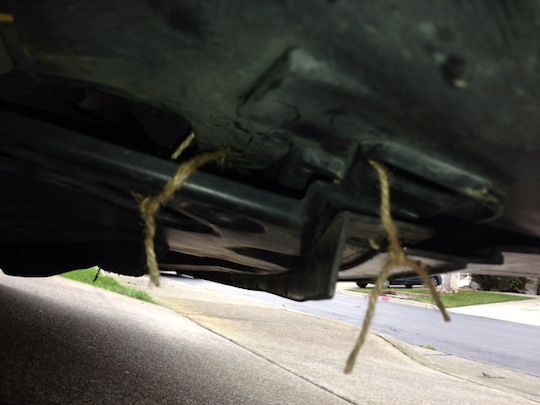 So then I busted out the mutherfucking twine.
Shit is STILL holding and it's been months.

Feeling pretty stoked here about my goals list. If I were a major league baseball player batting .400 halfway through the season, I would be on the cover of Sports Illustrated. I would probably be renegotiating my fucking multimillion dollar contract.

And you can bet your ass I would have lots of offers of #FREESHIT.

How are your goals for the year going?

Get any good free shit lately?

Do you want to know more about the Grandmaster Cleanse?

What was the last thing you Macguyvered?

Did you ever watch Macguyver? Or am I the only one in the blog world who is old enough to remember him?

Notice how I made a rainbow in my questions there? Pretty fucking SWEET! I noticed that some other bloggers have started asking more than three questions, so I'm copying them. But I put my own special twist on it by making it into a #rainbow #milfluential