I've been really sick. I know there's no better time to run than when you're certain kinds of sick because pushing through pain and discomfort is the most satisfying, cleansing feeling as the exercise purges toxins that are making you feel like shit. I tried to recall the basic rule. If it's below the neck, don't run. Or is it above the neck? Shit. I couldn't remember, so I looked it up –

ABOVE the neck = get crackin', slacker!

Since it was only a weird headache (ABOVE the neck) that was making the room spin, I figured I was good to go. And thank GOD because I HATE missing a workout. The feeling of vertigo made eating my rice cake and peanut butter a bit of challenge, but sprinkling a little chia on top helped a lot. I decided to test out the new EnduroMax-celeratorPlus Carb-fortified All-natural workout/replacement beverage for this run. (I wish I could say someone contacted me about trying it and that it was my first free shit, but no). I loaded up my HydraPak

and grabbed my iPod and headed out the door. I got to the end of the driveway and I realized –

MUTHERFUCKER! I FORGOT TO GET DRESSED! AND I STILL HAD MY FUCKING SLIPPY-SLIPS ON! 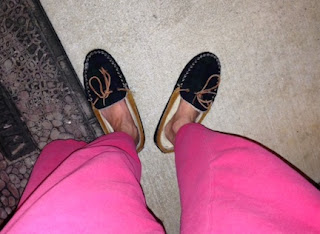 This is an actual picture of my legs and feet in my jammies and slippy-slips.
If you want to see more of me, then get to work on the whole 100 FB likes
and 300 Twitter followers thing. And give me some fucking comments!

Must've been the headache messing with me! So I went back in and got dressed and put my shoes on. I was about to leave again when it dawned on me that I might want to bring my phone in case I passed out. This spinning effect of the headache was getting trippy, and there were some interesting halo-effects around all yellow objects. Passing out was a possibility. Then it dawned on me that if I passed out, I wouldn't be able to call anyone anyway! So the phone would just be dead weight to carry. I left it at home.

As I walked down the driveway for the second time, I decided that I would take it easy and skip the 7 miles of tempo at 10K pace that were on the schedule. I was determined to hit pilates later on and had a feeling that SICK + TEMPO = no pilates.

I don't know what happened next. Apparently, immediately after performing that equation in my head, I lost consciousness. When I came to, I found out it had happened right at the end of my driveway so I didn't even get any run in at all! I was so pissed. Apparently, I have a concussion and they're telling me that I shouldn't run. Fuck that, bitches.

You betcha I'm going for my goddamned run. Especially after all those fucking taquitos and 7-layer dip I ate on Super Bowl Sunday.